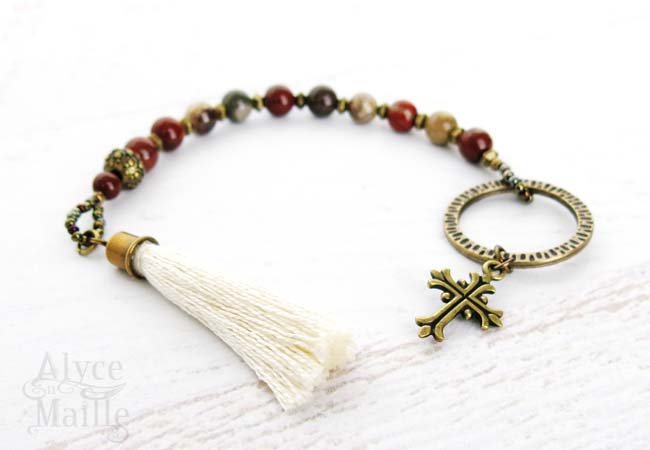 Prayer beads are used in many cultures and religions around the world today. They are used by men and women alike. The religious practice of counting prayers using a string of beads is actually very old. Prayer beads have been around in various styles and forms for centuries. The exact origin of prayer beads however is unknown. The earliest historical reference goes back to 500 BC in India but has also been depicted in a Greek fresco dating back to approximately 1600 BC.

THE USE OF PATERNOSTER PRAYER BEADS

Paternoster prayer beads were used to help aid one in meditation and devotional prayers. In Latin the word “paternoster” translates to “Our Father.” Each bead was used to help one keep track of the prayers recited. The beads themselves were made from various materials ranging from simple wood beads to extravagant metals and precious gemstones. The construction style also varied from a circular loop form to a linear string of beads that could be worn on a belt or cloak. The number of beads in a paternoster differed however. In early medieval versions, they typically ranged from a string of 10, 50 or 150 beads. A typical set of 10 beads were separated by a larger marker bead known as a “gaud.” The smaller beads were meant to represent a Psalm while the guad bead was meant to represent “The Lord’s Prayer.” This was considered the main prayer in medieval Christianity. In those times the prayer was typically recited in Latin.

The Pater Noster (the Our Father) in Latin

sicut in caelo, et in terra.

Over the years various iterations of prayer beads have been created for devotional use as well as fashion accessories. As religious practices changed so did prayer beads. Over many years, paternoster prayer beads eventually evolved into today’s modern-day rosaries.

To this day though, prayer beads are still an integral part of many religions. They help to keep one focused in meditation as well as helping keep one’s place in structured prayers. Prayer beads also help serve as a symbolic reminder of the faithful’s devotion and commitment to their religion.